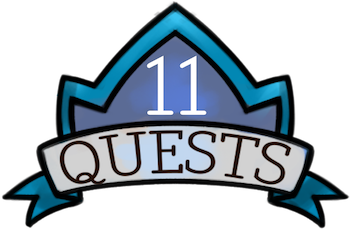 What happens when climate change is threatening the magical creatures of Earth?

11 Quests tells the story of eleven eleven-year-olds, each with a Quest that they need to solve. I plan for 11 Quests to be a four volume series, with some additional short stories.

These three volumes introduce the 11 Questers and follow them through the challenges of their quests. You can read these in any order.

The Quests of Underice features Carla and James, a pair of friends that didn't even know there was magic in the world. They meet Geneva the fairy and Davey the dragon as they seek to figure out their quests in Underice, a realm within the massive (but melting!) Greenland ice shelf.

The Quests of the Lost Jungle takes you to the Amazon rainforest where you meet Tumi, a boy who lives in the jungle. The non-magical jungle, that is. Tumi unexpectedly finds his way into the Lost Jungle where he meets Esmeralda the unicorn. They meet up with two more adventurers and together they uncover a plot to turn some of the magical rainforest into a cattle ranch.

The Quests of Grandakar is set in the city of Grandakar, which is flying around the world. Swish and Quilleen are residents of the magical city, and they’re trying to find a way to keep the floating island from falling apart. They’re joined by Zinnia who climbed aboard at one of the city’s stops along the way. The effects of climate change threaten to pull Grandakar from the sky. Can they save it in time?