Something big is brewing in a world encased in ice.

Eleven-year-old Carla and her friend James chase a thieving gnome … all the way into the hidden land of Underice. There, they discover magical creatures they never knew existed and rumors of a mysterious gathering in the north! Carla has an “11 Quest” to solve, which her mother explains is a special kind of quest for some eleven-year-olds. Can Carla and James unravel her 11 Quest? Luckily, they don't need to adventure alone as they are joined by two Underice natives that also happen to be on their own quests.

This volume combines the first three books (Chasing the Gnome, Dragon Country and Culpepper's Statue) in the fast paced adventure series which touches on ways that climate change affects even the magical among us.

The Quests of Underice is available from Amazon and from your local bookstore. 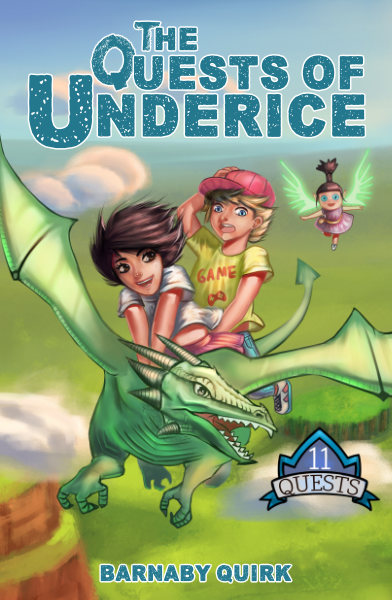 Carla was playing in her backyard when she saw the little man. She wouldn’t have seen the man at all if she hadn’t been swinging as high as she could and leaning back so far she was nearly upside down. From her perch on the swing, the man’s hat caught her attention. It was bright red and nearly a foot tall.

A one-foot-tall bright red hat would be noticeable on its own, had it suddenly appeared out of nowhere and landed near her house. This bright red hat sat atop the head of a man who could not have been more than three feet tall. The man would have looked like a small boy were it not for his long, white beard. He wore a green shirt and brown trousers, and looked exactly like the garden gnome statue in Mrs. Kimble’s yard across the street.

Carla didn’t know what to do. She didn’t think the man was paying any attention to her. While swinging, she caught only brief glimpses of him, which were not enough for her to figure out what he was up to. She decided to slow herself down enough to jump off the swing. She thought that the little man might not notice if she crept away while the swing continued swinging.

“One … two … three … ,” Carla counted to herself before leaping from the swing. She got down on all fours and crawled behind her jungle gym’s slide so that she could peek out and see what was happening.

The man had climbed up on top of their air conditioner. Carla had asked her dad just the day before what the big, green box behind their house was. She had noticed it because it had a fan that was rather loud. And now, the man in the red hat was peering into the air conditioner, looking at that very same fan. The fan must have been off at that moment, otherwise his hat would have been blown off of his head.

Carla was quite sure that no one was scheduled to come to fix the A/C. It was time to check with her mom. She crept quickly along the row of evergreen trees that separated her yard from that of her best friend, James. She made sure to keep the trees between her and the little man. As she moved, Carla couldn’t believe that Red Hat Man hadn’t spotted her. Her shoulder-length black hair blended in well with the trees, but her white T-shirt and bright pink skirt certainly didn’t. Whatever the reason, Red Hat Man just continued looking into the A/C. Now that Carla was a bit closer, she could see that he had some tools on his belt.

When Carla reached the deck behind her house, she climbed the steps and ran toward the sliding door. She wasn’t worried about being spotted there, because a part of their house stood between her and Red Hat Man. Carla nearly ran into her mother as she darted into her house.

Tabitha, Carla’s mother, had been setting the table for dinner. It was the middle of summer, so the sun was still high in the sky even though it was early evening.

“Mom! There’s-a-short-man-with-a-long-beard-and-a-red-hat-outside!” Carla was speaking so quickly that it would have been a miracle if anyone could have understood her.

“Slow down, honey,” Tabitha said. “All I could understand was ‘Mom.’”

“I said, there’s a short man with a long beard and a red hat outside. He’s standing on our air conditioner. And he has tools.”

Tabitha looked surprised. “So soon?” she asked no one in particular.

“Were you expecting him, Mom?” Carla looked even more surprised than her mother.

“Well, sort of. You see, Carla, you just turned eleven last week. For some people, some time between their eleventh and twelfth birthdays, they are chosen for a Quest. An adventure. They don’t go seeking the Quest, it just finds them. I had one when I was eleven and a half. Your father didn’t have one.”

“I don’t get it, Mom. How do you know this is a Quest? Did you see a Red Hat Man when you were eleven?”

“He sure is. But what do I have to do for this Quest?”

Tabitha shrugged. “I don’t know. That’s the trouble with Quests. Since they’re all different, we don’t have any clues. We just have to figure it out as we go along.”

Carla looked concerned. “Do I have to do this Quest all by myself?”

“Some people do them alone, but many do their Quest with a friend. The only rule that I’ve heard is that the friend must also be eleven years old.”

“If you don’t want to miss your Quest, you’d better get going! I have no idea how you’d catch up if he gets away!”

Carla ran to the phone and dialed James's number. “James! It’s Carla. Get over here, quick. Stay close to the house and come up on the deck. I’ll meet you at the back door.”

“Bye,” Carla replied and hung up the phone.

Tabitha handed Carla her cell phone. “We didn’t have cell phones when I was your age. I don’t know if you’re allowed to use them while on a Quest, but I’ll feel better if you have it. Take care, sweetheart. Call if you need anything. Stick with James. Have fun, and be safe. Oh, and take this.”

Tabitha handed Carla a backpack. “I packed this backpack with a few useful things, figuring that there was always a chance that a Quest would come your way. I still can’t believe that my little girl is already going out on an 11 Quest!”

Carla put her arms through the straps of the backpack. “Thanks, Mom. I have no idea what this Quest is all about. Until just now, I had never even heard of one!”

“Well, you’re generally not supposed to talk about them. I have no idea why, but that’s what my uncle told me when my Quest came along.”

James appeared at the sliding door and was inside in a flash.

“James! You won’t believe what I have to tell you,” Carla began. “But I don’t even have time to tell you right now. We’ve got to go.”

“On a Quest! I’ll explain it all on the way. Mom, can you give James's parents the scoop?”

“Sure,” Tabitha said. “You kids have fun, and do be careful. I love you, Carla. Come home safely!”

And, with that, Carla and James stepped cautiously through the sliding door and into their Quest.