Get The Gamerunners from Amazon. Coming soon elsewhere 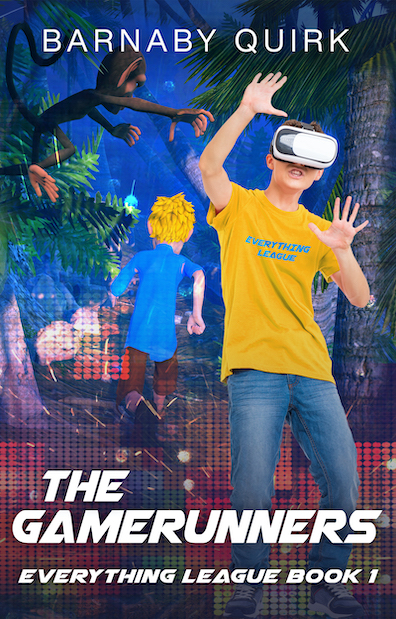 A virtual tournament, a rigged game, and a gamerunner on a mission to make things right…

Thirteen-year-old Bobby Thomas knows the $50 million Everything League grand prize is way out of his reach. His game time is limited to library hours, and he hasn’t had a chance to build up his skills as a player. Instead, he spends his time as a gamerunner — one of the bad guys who make the game more challenging — and finds himself behind the scenes, unnoticed, against some of the most skilled players.

But the more Bobby plays against top players, the more he begins to suspect the competition is rigged. And when the dangers of the virtual world start spilling into reality, Bobby, working with Everything League programmer Amanda, must unmask the cheater before he and his friends suffer a real-life game over.

The Gamerunners is a middle-grade sci-fi novel that takes gaming to the next level. Readers who like fast-paced action, futuristic gaming, and heroic underdogs will love Barnaby Quirk’s virtual adventure.

Buy The Gamerunners to boot up a fun thrill-ride today!

President George Washington stood between Bobby Thomas and his favorite game, droning on endlessly with his fluffy white hair bobbing as he spoke.

“The stock market crash of 1929 is considered to be the start of the Great Depression,” President Washington said.

“This is ridiculous,” Bobby thought. “The Great Depression happened a long time after Washington died.”

This was true, and it wasn’t the real George Washington leading the class. Bobby was sitting in his seat at Slauson Middle School and, like the other six students who were physically present in his class, his eyes and ears were covered by virtual reality goggles that took over all of his vision and almost all of his hearing. The classroom had no teacher because Mr. Bodkin, in the virtual guise of George Washington, worked from home. Further, the room had no chalkboard or whiteboard or projector. Plain gray tiles covered the floor and the walls were a pleasant shade of yellow and completely lacking in decoration.

There was no need to have anything on the walls, because the students could “be” anywhere. Virtually, at least. The scene that Bobby saw around him was of the New York Stock Exchange in 1929. Men in nicely tailored business suits were leaving the room, slowly shuffling away with shoulders slumped. Some had red, teary eyes. Many had just lost all of their life’s savings. The men paid no attention at all to Bobby, his classmates, or George Washington, because they were just computer simulations and their programming told them that now was the time to be unhappy.

“If this class doesn’t end soon, I’m going to be suffering from great depression,” Bobby thought.

Unfortunately, the class took a turn for the worse.

“I think that about covers the stock market crash,” Washington said. “Before you go, I will give you your scores for last week’s test and remind you about the assignment for next week.”

Bobby liked history and had studied hard for the test, but it had been a difficult one. The scene of the stock market was overlaid with Bobby’s test score, eighty-nine percent.

“The highest score prize goes to George Unger, who pulled off a ninety-nine,” Washington said. “He was ten points above second place. Good job, George!”

Bobby was livid and stewed silently in his VR rig. He glanced at the smug look at George’s virtual face and became even angrier.

“George doesn’t know anything about history,” Bobby thought. “He had to have cheated, and I studied two whole hours for that test. It’s not fair!”

Without proof of cheating, Bobby was powerless to do anything about it. He took two deep breaths and focused his attention back on his teacher.

“And remember,” Washington said, “next week I expect you all to be prepared to answer questions about why the loom is an even more important invention than the printing press.”

Bobby shook his head. He would not be able to answer questions about that, because he thought the printing press was tons more important than the loom.

Washington saw Bobby shake his head and said, “Mr. Thomas, do you—”

The view went black and some text popped onto the screen: “Five minute break. Get up and move!”

Bobby removed his goggles and the control gloves he used to interact with the virtual world. His chair, just a slightly padded flat surface, tilted downward, causing Bobby to land on his feet. He stepped out from the center of what looked like a large, black wheel. The words “Spinmaster 2050” were written in ultra-modern, white letters along its edge.

The Spinmaster 2050 was so large that the room only had space for eight of them. It didn’t matter, though. Most kids took their classes at home. Those who couldn’t afford a VR setup at home had to physically go to school to use the ones provided there.

“Hey, Bobby, nice hair,” one of the girls in the class, Julie, called out with a giggle. Her teasing was annoying, but Bobby never had a good comeback.

Despite wearing the same kind of goggles, Julie somehow looked perfect, her brown hair in a fancy swoop on top of her head.

Bobby rushed past Julie and mumbled an “Err, thanks” as he left the classroom.

“My hair never has trouble in VR,” he thought.

He went to the boys’ room, used a little water to try to tame his uncooperative hair, and then rushed back to class. Some of the other kids in his class spoke to each other, but Bobby was among those standing outside their Spinmasters, waiting for the five minute “stretch” period to end. He pulled a stick of gum out of a pack in his pocket, unwrapped it, and started chewing. He didn’t have a lot of freedom during class time, but gum chewing was something the software couldn’t yet detect.

Bobby sighed as a green light on the side lit up, and he stepped back onto the platform inside the circular rig. He had five minutes of free time before his next class started. His green eyes were bathed in light as he donned the VR goggles without sitting down.

With history class over, his view jumped to The Lair, as he called his home space online. The Lair was a cave with dark gray stone walls that appeared to be slightly wet from condensation. The wetness was totally unnecessary, but Bobby liked the way the light from the room’s torches reflected off the walls.

It was a narrow cave, and much of it was taken up by two big wooden tables that ran along the two sides. The cave ended abruptly at a stone wall with a bright yellow poster emblazoned with “Everything League” in neon blue. The poster matched the shirt that Bobby was wearing, both in the real world and in VR.

In virtual reality, he could have had a much bigger space, but he liked The Lair the way it was.

Opposite the wall with the poster was a heavy wooden door with a slot in the middle. Just inside the door, an envelope sat on the floor.

In the real world, Bobby walked forward, the Spinmaster turning with his steps so that he remained in one place. In The Lair, he reached the door, bent down, and picked up the envelope, his control gloves giving him the sensation of gripping the paper.

He flicked his wrist, and the envelope disappeared, its contents remaining in his grasp. This was more fun than opening envelopes in the way you have to in the real world and way more fun than just tapping on an email in a list of messages.

The paper contained an advertisement. He normally threw ads in the trash straightaway, but this ad had the very same yellow and neon blue logo that was on his shirt. It was from Everything League, and Bobby’s eyes widened as he read.

“I wonder if Julio knows about this.”

He couldn’t wait to talk to his best friend about the news, but he had to wait through math class before he would see Julio during gym.

You can find The Gamerunners at Amazon. Coming soon elsewhere