The secret, magical Lost Jungle in the Amazon is in danger…

At the age of eleven, boys in Tumi's rainforest tribe spend eleven days away from the tribe, living on their own. Most of the boys encounter the everyday plants and animals of the jungle. Tumi stumbles into the Lost Jungle, a hidden land of magic.

During his adventure there, he meets three more eleven-year-olds each with a quest of their own. They uncover a plan to clear away some of the jungle to make way for a cattle ranch. They have help from a variety of creatures along the way, but is it enough?

How can four kids save the Lost Jungle?

This is three books in one! The Unicorn Guide, Castle in the Amazon and The Mimicbird's Flight make up the complete trilogy. This story follows The Quests of Underice, but can also be read on its own.

The Quests of the Lost Jungle is available now from Amazon and from [your local bookstore](https://www.indiebound.org/book/9780985787769). 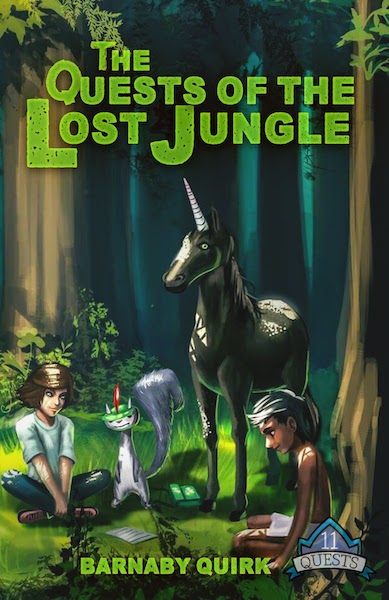 Tumi had a huge smile on his face as he ran into the jungle alone. He was setting off on his Usimaro, which means “moon run” in his tribe’s language. The Maitsuba tribe, to which Tumi belonged, sent boys out into the jungle on their own as a first step to becoming grown members of the tribe. Most of the children were scared when the time came to head out into the jungle alone, but not Tumi. He knew this jungle top to bottom. Or so he thought.…

Tumi would be gone from home for one night for each year since his birth, eleven nights in total. To succeed, he had to spend the whole time without anyone from his tribe seeing him. He had been running for five minutes, and already he was totally confident that he would succeed.

In the United States of America, children would take a whole backpack of stuff to a sleepover at a friend’s house. Tumi had only heard of the USA once, and he didn’t have a backpack. The extent of his “stuff” was a small knife made from a chiseled stone, a bow and two arrows. His only clothing was a loincloth, something like a small bathing suit. That suited Tumi just fine. He could feel the jungle with all of his senses as he rapidly made his way along the trail away from the Maitsuba’s current settlement.

The Maitsubas live deep in the Amazon rainforest, far from any city. They have no televisions or electricity, and cell phones can’t get a signal anywhere near their simple village.

Tumi had heard tales of boys who had never returned from their Usimaros. Travelers who reached their village would tell them of the huge buildings and fast-moving cars in the city. Some boys used the Usimaro as a chance to join modern life.

Not Tumi. The air was thick with moisture, but clean, refreshing and without a hint of the pollution cloud that hangs over big cities. A million different kinds of plants and animals surrounded Tumi in the jungle, but a city was just concrete and people. The boy was quite happy where he was.

Reaching the end of the trail, Tumi quickly started heading west. It was slower going off the trail, because of the narrow gaps between the trees. Tumi was a thin, four-and-a-half foot tall boy and he could zip between plants almost as quickly as a cat.

He stopped suddenly and looked at the ground. There were paw prints. An animal’s scent was still fresh in the air. Tumi grabbed the trunk of a nearby tree and started climbing up, up, up until he was sitting on a branch twenty feet off the ground. Seconds after he sat down on the branch, a black jaguar came loping along the jungle floor, just where Tumi had been. It was a beautiful animal and Tumi’s face brightened to see it. He was not afraid. The jungle had told him that the big cat was coming.

The sun was getting low in the sky and the shadows were growing longer. When night fell, Tumi would not be able to see the black jaguar even if it were only two feet away. So, he stayed in the tree. He walked along the branch, using vines to help steady himself. Using another vine for support, he reached over to the next tree, a coconut tree. He pulled off a nice, ripe coconut and walked back to his comfortable perch near the trunk of his tree. Tumi had plenty of practice opening coconuts with his simple knife and soon had a tasty treat before bed.

Tumi was nearly invisible in the fading light of twilight. His dark brown skin and black hair allowed him to blend in well with the tree trunk.

After he finished eating, Tumi reached up and tied a vine around his hand. That was a trick he used to keep himself from tumbling out of a tree while he slept in it. He had never fallen from a tree before, and he wasn’t about to start now. He leaned up against the trunk of the tree and stretched his legs out on the branch, grinning as he imagined the fun adventures he would have during his Usimaro. Soon, he was dreaming of playing games with the animals as he made his way through the jungle.

Tumi’s eyes popped open. It was dark, with moonlight streaming through the few gaps between the leaves. There were eyes looking back at him, just a few inches from his face. In his sleepy state, Tumi thought the face looked like it belonged to a small, old man about half his height. As his eyes adjusted to the light, he noticed that the man had taken his bow.

He looked again at the face and realized that he was looking at a monkey sitting in his lap and holding his bow, one of the few items he needed for this adventure.

“Hey! Give that back!” Tumi exclaimed in his tribe’s language. He made a grab for the bow, but the monkey was just out of reach. He unwrapped the vine from his arm and inched forward on the branch. The monkey inched backward, eyes fixed on Tumi.

The boy made a quick and sudden grab for the monkey, who turned around, dropped the bow to the ground and leapt to the nearby coconut tree. The monkey made an angry squawk at Tumi, grabbed a coconut and tossed it, narrowly missing Tumi’s head.

With a last, irritated glance at the monkey, Tumi returned to the trunk and slowly shimmied down. He paused a few feet from the ground, smelling and listening. Sensing that the jungle floor was free of predators, at least for now, he dropped the remaining few feet. Within seconds, he had the bow back in hand and was making his way back up the tree.

Tumi tied his hand and his bow to the vine and settled back down to sleep once more. Aside from a few dreams of monkeys taking his things one by one, he slept peacefully and woke with a smile when the sunlight streamed into the trees once more.

Tumi was preparing to head back to the jungle floor when he heard the snap of a twig and saw one of the hunters of his tribe making his way through the forest. Tumi froze and remained absolutely silent, worried that he would be spotted and his Usimaro declared a failure. But the hunter did not spot little Tumi, intent as he was on a set of tracks on the ground.

When the hunter was out of sight, Tumi made his way down the tree and quietly picked his way through the jungle, heading away from the direction that his tribemate was going. He was determined to put as much distance as he could between his tribe and himself. He contented himself to just eating the plants he could quickly pluck on the way. His first hunt would wait for the next day.

For the next several hours, Tumi switched between walking and running, but always moving as fast as he could. He stopped for a swim as he crossed a river at one of its shallower points, where he could clearly see the bottom. The rivers that split off from the Amazon were home to a huge variety of animals, many of which Tumi had no desire to meet.

The boy’s spirits soared as he walked away from the river. He had never seen this part of the jungle before, and he was sure that no one from his tribe would be walking there. Tumi’s smile drooped a little as he looked around and realized that the plants seemed different. They looked similar to the plants at home, but everything just seemed a bit off. It felt as if he had stumbled upon a six legged tiger.

He shrugged off his unease, and scouted around for some food. The sky was turning pink and night was approaching. Soon, with a meal of nuts and fruit in hand, he climbed into the safety of a nearby tree. He enjoyed his mango immensely. It was sweeter than any he had ever had before.

The sky dimmed and Tumi could see the stars appearing through the gaps in the foliage above. Looking down, he could see the ground clearly, thanks to the flickering light coming from a few of the ferns growing in this part of the jungle.

Tumi rubbed his eyes and looked back at the ferns. The leaves of the ferns, which had been green during the day, were now orange, flickering flames.